The Society continued to perform (except for the World War I years 1914-1918), and was at the Theatre Royal until its closure in 1925 when it became a barrel store for Greene King.

Sir Peter Hall's father R E A (Reg) Hall performed with the Society in the 1920s, and took the leading role of Giuseppe in The
Gondoliers in 1924. This was the Society's last production at the
Theatre Royal until it re-opened in 1965.

H I Jarman - the well-known local photographer - also took roles  with the Society, as well as the production photographs. Unfortunately,  we don't have these originals either. Astoundingly, there is no complete record of the Society's history - only various fragments that have been
passed on. We would dearly like to have scrapbooks/photographs/reviews/cuttings, especially of the early years.  Several programmes are also missing - please contact us if you can help.

In the 1920s, the Society moved to The Playhouse (where the Argos store now stands in Buttermarket), which was a cinema with a stage as  was usual at the time, and performed there until it too closed in 1959. Brigadoon was the Society's last musical there, and the play Doctor in the House in December the last production.

The Society performed the first production in the newly  refurbished Theatre Royal before it was officially opened. The repairs  were not complete and the upper gallery was not in use. The production  was the play Blithe Spirit in May 1964 (the first musical was Free As Air in 1965). All proceeds from the play were given to the Theatre Restoration Fund, and the Society continued to contribute to the fund with donations of several thousand pounds. 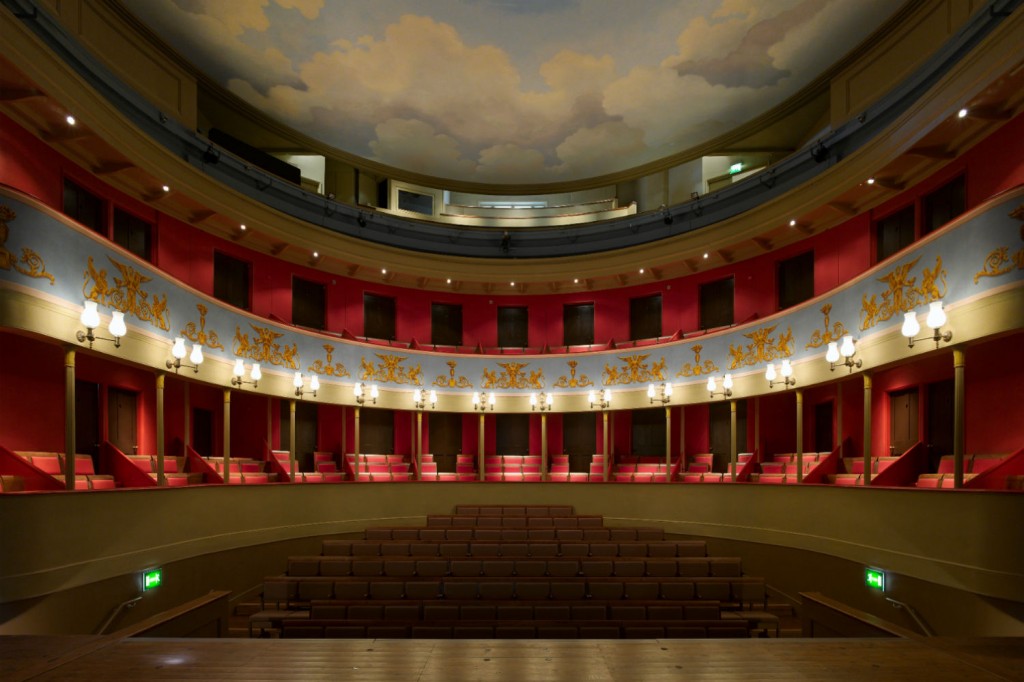 The Theatre Royal Bury St Edmunds
Over the years the Society has continued to perform musicals and concerts for the community. It has also participated in community events, including floats in the former Carnival, and it presents an annual prize of £100 to a student about to embark on a course of study in the performing arts. This is called the  Alan Holt Award named after a former President of the Society. The Society team won the BBC Radio 2 quiz "Mad About Musicals" in 1996, beating off competition from amateur societies from all over the country. It has received awards from NODA for best regional musical in 1997 with Me And My Girl, and was runner-up in the national poster competition with the poster design for the same show. The Society also achieved the NODA Eastern Area Region 7 award for best production
for Crazy For You 2003, and our programme for the 2003 HMS Pinafore won the NODA Eastern top award in the standard programme class.

Well-known figures from Bury's past have been Musical Directors of the Society, including C J H Shann, Owen A Clark, Percy Hallam, Wilfred Mothersole, and Elthelbert Taylor. There have also been some notable Directors including Muriel Harding, who had been leading soprano with the D'Oyly Carte Opera Company, and was the wife of Donald Adams, their equally well-known principal bass. One of the Society's outstanding actors in the post-war years was John Petch, who was a Chairman of the Society, and also became manager of the Theatre Royal. For dancing, the Society in the early years called upon the expertise of Miss Lilla M Tinkler, who had a noted ballet school in the town.

Over the years, the Society has performed over one hundred musicals and concerts, and nearly fifty plays. The operetta most performed is Iolanthe (6 times, in 1920, 1928, 1950, 1963, 1975, 1993) followed by Merrie England (also 6 times, but two of these were concert versions: in the open-air in 1951 for the Festival of Britain and to mark the Queen's Jubilee in 1977, narrated by Mrs Olga Ironside-Wood), then The Mikado (5 times), and The Gondoliers (5 times). The last recorded plays performed by the Society were in 1974 of The Brides of March and in 1975 of Cat on the Fiddle. The Society entered drama festivals at Felixstowe, and were highly successful, getting the top prizes. They also produced open-air Shakespearean productions in the Cloisters of the Abbey Gardens. At one time, the Society ran a play-reading circle at The Angel Hotel, and also rehearsed
there.